Ever wondered what the first ever viral video was?

It did NOT go viral on Youtube (although I’m using  youtube to show the video below, just easier)

It was published in 1996 and was spread entirely through email. It even predates solo ads which are ancient in and of themselves(Which they promote in Perpetual Income 365 ).

The craziest part of all is that if you look at the videos that have the  most views of ALL TIME, we haven’t advanced that much since 1996.

There is a lesson here, folks, you don’t have to be a rocket scientist to get viral video traffic.

But you do need to know a few simple things, which I teach in my Youtube course: 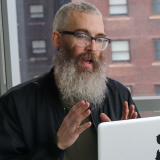 Chad Kimball is an entrepeneur and internet marketer who shapes his work around his life, rather than the other way around. He quit his job and has been working (as little as possible) from home since January of 2000.

6 replies on “First Ever Viral Video”

Chad, I think for a 1st time video that is not bad. Just goes to show where you can get to if you use your imagination in creating something.

ANSWER FROM CHAD: Yea its not bad, actually a lot of work went into that video, just kinda creepy, right?

Not bad, though don’t understand the mixture of African music and english advertisement. But seriously I never though about the 1st viral video on the net. Good shame Chad

Hello Chad, hey what a nice lesson to learn… Video advertising is one of the best things on the market thanks ;-)

Chad –
Was’nt that you before you hit puberty?
Amazing what a little and a few years will do for a guy

On a more serious note

ANSWER FROM CHAD: shoot me an email at chadwarrior@gmail.com

Chad, I don’t know it was the 1st viral video or not but YES I did watch it years ago